When you’re in the middle of preparing a glorious meal, with a myriad of exotic ingredients on the recipe list, it can be a real pain in the neck to mix something with a conventional mixer. Your hands are all sticky and sloppy in the process, and the last thing you want to do is touch kitchen utensils, righ? Therefore, it might be a good idea to equip yourself with a solid heavy-duty, professional stand mixer.

Since obtaining such a piece of culinary master equipment usually means making an investment worth a proper fortune, we’ve decided to help you and found some great models boasting pretty impressive characteristics for a fairly reasonable price – basically the best stand mixer. Here’s what we’ve come up with: 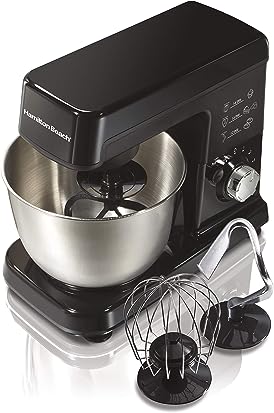 Powered by a study 500 Watt motor, this stand mixer from Hamilton Beach is capable of mixing up pretty much every ingredient without getting clogged up.

Also, you can use this mixer with three different attachments (which come with it), to achieve various mixtures by beating, whipping, and creaming. The attachments in question are as follows: a dough hook, a whisk, and a flat beater.As for the bowl, its space-wise construction means that the entire surface of it is covered by the mixing action. The bowl is completely dishwasher safe, and it can take in 3.5 quarts worth of ingredients in one go.

The mixing process has 6 different speeds, providing the gradual levels of intensity as well as flexibility in the processing of the more sensitive foods.

Needless to point out, the mixing is completely hands-free (all you need to do is to set the parameters and let it do its magic ), and to ensure that its stable, there are special non-slip feet.

All in all, easy to use, and standing at a fair, budget-friendly price, this mixing solution from Hamilton Beach will definitely not disappoint you. Definitely an item worthy of the flattering title of the best stand mixer under $100. 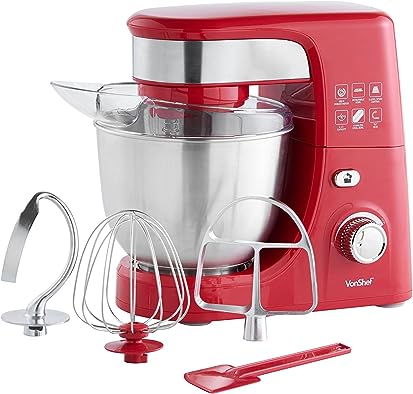 Coming into our list as a rather pompous entry featuring a stylish retro Americana build, this VonShef mixing solution also possesses some pretty impressive technical features. The power source behind the pretty facade is the compact and plucky 300 Watt motor, with an additional speed control dial for finer settings and adjustments for the mixing mode.

As for the working force spurred by this little motor, you can choose between three different attachments, namely: a beater, a chrome balloon whisk, and a chrome dough hook. Among these useful accessories, there is also a conveniently included spatula you can use to scrape off any of the remains after the mixing process has been completed.

The bowl is made out of high-quality stainless steel, and it’s capable of taking in 3.5 quarts of your favorite ingredients. Also, it is completely dishwasher safe, meaning you don’t have to worry about the maintenance.

As pointed out by the manufacturer, this stand mixer is best used for preparing various types of dough, such as those for pizza, cakes, bread, pastries and much more! 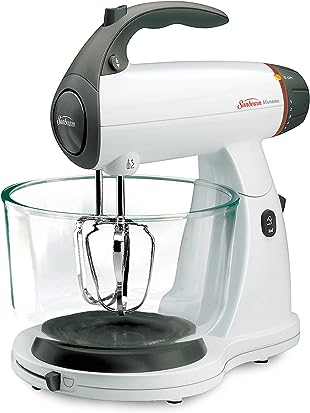 The Sunbeam’s MixMaster is a solid stand mixer featuring a curious design resembling an ordinary, non-standing mixer, which has been somehow upgraded to its standing version.

To house the wide variety of ingredients of your choice, there are two separate glass bowls, one of 2 quarts and the other of 4 quarts. When alternating between them, make sure you flip the switch on the mixer, in order to get the best coverage for each bowl.More on the topic on its versatility, this model also includes three separate pairs of attachments to enable a variety of mixing styles.

These handy accessories are as follows: a beater, a whisk, and a chrome dough hook.The motor on this model produces 350 Watts of power, and that is usually more than enough to provide a good mix to a range of different ingredients and doughs, no matter how dense they are. This powerful mixing ability is available in 12 different speeds, depending on what sort of mixture you are trying to achieve. 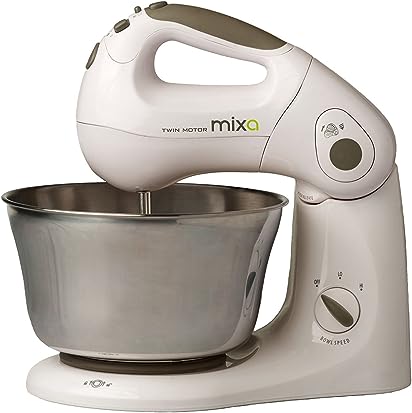 Featuring an innovative twin motor construction, as well as an attractive design, this mixing utensil from NextGenStore, offers a great mixing performance for a pretty small, budget-friendly price.

The way this newly-developed twin motor system functions is that the primary motor powers the beaters while the second rotates the bowl. As a result of the mixing process thus enhanced, you’ll get a more evenly distributed mixing pressure, and it will take it less time to finish its job. Another incredible construction perk of this versatile stand mixer is its ability to transform into a regular mixer! All you need to do is simply detach the top part, and use it as you would a conventional, non-stand model.

The total power of the main engine amounts to 325 Watts, separated into ten speeds for achieving a finer mixture with different ingredients. The speeds are classed into 5 of low and 5 of high intensity, providing you with a variety of modes for various sauces and doughs of your choice. 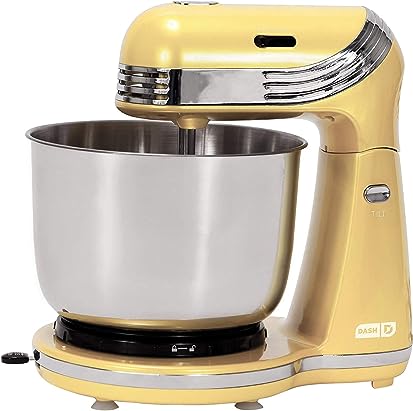 Rating – 4.0 – not as strong as the aforementioned models, but still great for casual users

A stylish retro build, as well as simple working properties for everyday casual use are the main selling points of this compact, easy-to-use stand mixer by Dash.

Made to be as simple, and effective as possible, this mixer has a construction where every single non-electronic part is completely dishwasher safe, making it a piece of cake when it comes to maintenance. The bowl that comes with this model is made out of high-quality stainless steel (also dishwasher-friendly), and it can house up to 2.5 quarts of ingredients.

The mixing process is separated into 6 different speeds, allowing you to adjust the mixing intensity according to the type of food you are preparing.

On top of everything else, this stand mixer comes with a handy little recipe book to help you orient yourself in the world of cooking (doughs specifically) if you’re a beginner. Also, the manufacturer issues a one-year warranty on this product and offers you access to their expanding database of new exciting recipes.

If you need a solid performance stand mixer to help you with your culinary exploits, picking any of the models described above wouldn’t be a mistake, just make sure that the one you do choose answers perfectly to your needs and cooking habits. This was the best stand mixer under $100 list, you’ve been great, happy shopping!